The Philadelphia Flyers have one of the most recognizable logos in professional sports. The “Winged P” has remained largely unchanged since the team’s founding in 1967, one of the very few teams that can say they never altered their primary logo in their entire history. With an unchanged color scheme, and long periods of time without making drastic changes to their setup, ranking their jerseys can be a difficult thing to do, but we’re gonna try.

The Philadelphia Flyers have a pretty simple color scheme. Orange, black, and white. You know what color doesn’t go with that mixture? Gold. To celebrate the 50th year of their existence, the organization decided to celebrate with a special jersey clad in gold. Gold trim on the crest and nameplate, and all gold numbers on the back and sleeves on a redesigned white jersey set these uniforms apart from their away jerseys. Even though they were only worn a handful of times, they are a monstrosity. Some Flyers alternate jerseys in the past end up being a cult favorite years after they were worn, but it’s safe to say these won’t have much nostalgia value as time goes on. 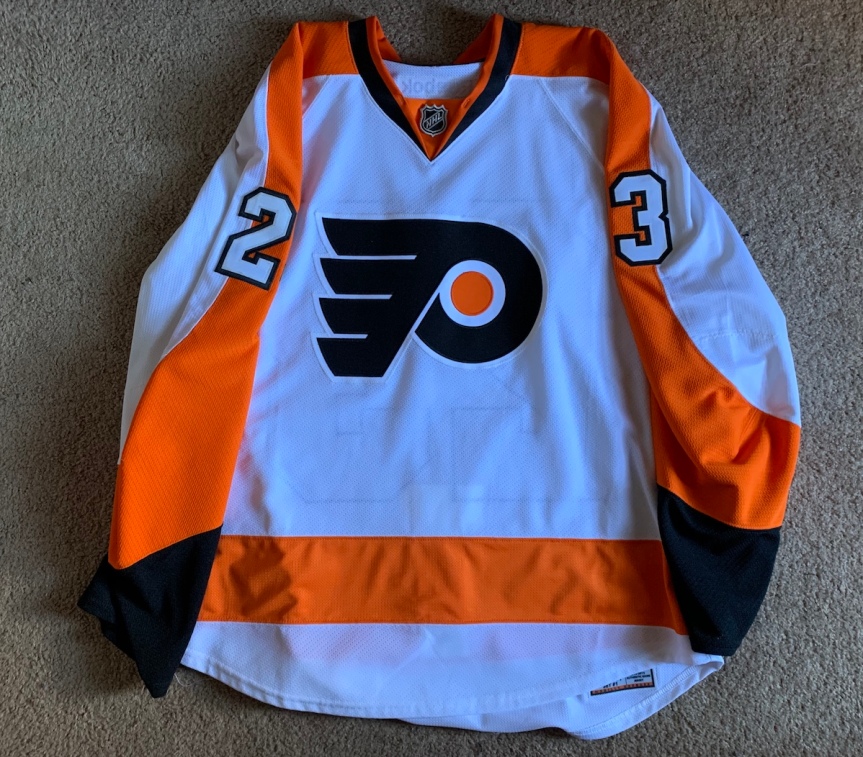 The current away jerseys are of the same style the franchise wore during its fledgling days in the 1960’s. The nameplate has changed over the years, from no name on the back in the 60’s, to a white nameplate in the 70’s, and later a black nameplate with white lettering during the current incarnation. After the original white jerseys were abandoned during the 1982 season, they were brought back as special jerseys for the 2010 Winter Classic, and later returned as the road whites the following season, where they remain until this day.

Now that the new reverse retros have had time to digest, seeing them in pictures, on ice, and now in person, I can finally put them on the official ranking list. What was originally pure disgust has simmered into simple distaste but they’re still not great jerseys. The “reverse” of their classic jerseys from the 1980’s and 1990’s features a new shade or orange on the torso, and inverted black and white on the sleeves. Spoiler, you can scroll down to the next entry to see what the originals looked like, but the inversion on the sleeves were enough to ruin these. To give them credit, the entire uniforms look pretty sleek, but damn, why are the sleeves white? 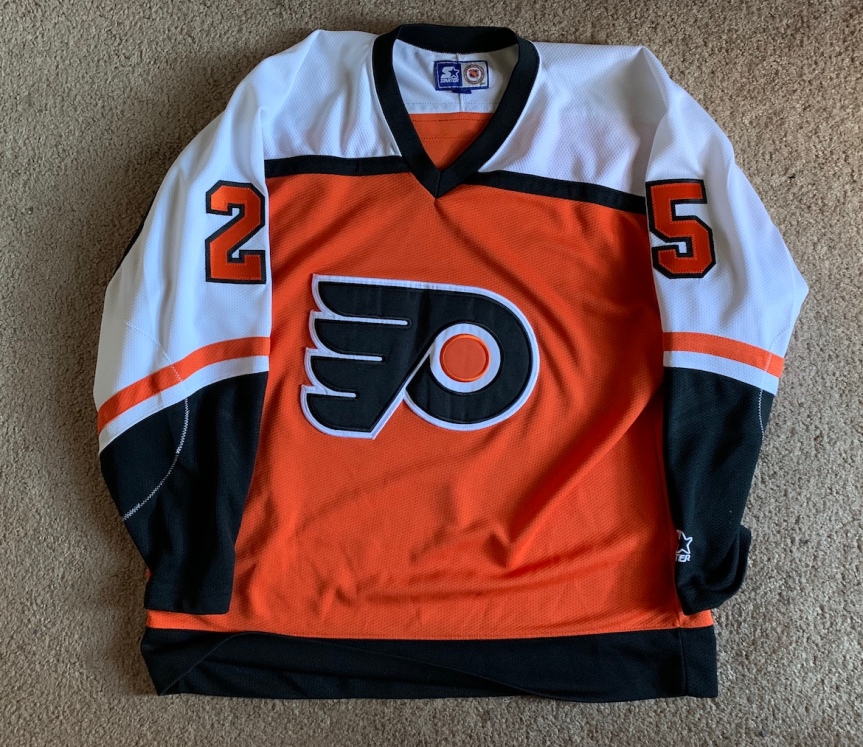 These were the second incarnation of the Flyers home jerseys, and set the pace for their jersey designs for the next 25 years. The orange torso and white sleeves were now separated by a black line, and a black bar was added on the bottom. They were the Flyers primary away jerseys from 1982-1997, and later used as an alternate from 1997-2001. They were laid to rest after the 2000-01 season, when the Flyers went with a black and white color scheme, leaving orange jerseys buried until 2008. 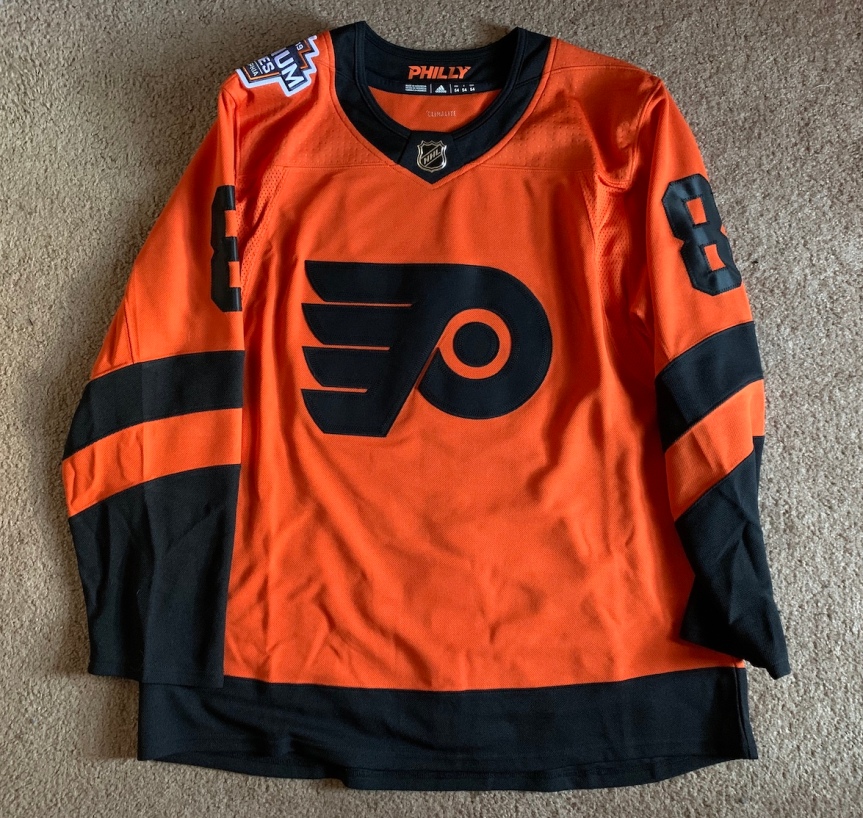 Personally, these have grown on me lately, but when they debuted, they were met with resounding negativity. In a weird attempt at a “color rush”, the Flyers went with all orange jerseys with a new black crest on the chest. The shade of orange is much darker than the current home jersey, and the stripes on the sleeves paid a subtle homage to their jerseys in the 80’s and 90’s. The crest was altered for the first time since the “chrome” jerseys were discontinued in 2007.

Remember when I used the term “cult favorite” for the 50th anniversary jerseys? Well, these have become favorites years later. It was the first attempt at altering the winged “P” logo, and the last until 2019. The logo was given a futuristic “chrome” look on overhauled orange jerseys. The jerseys themselves are a deeper shade of orange with redesigned sleeves. The nameplates and numbers were outfitted with silver trim. They remained in the rotation until Reebok took over starting in the 2007-08 season.

The Reebok Edge era started in 2007 and saw the Flyers completely re-engineer their setup for the first time since the early 80’s. Opting for a plain white torso, The sleeves were bifurcated into orange shoulders and black forearms, with white patches on the elbow. Even though this style was short lived, the change of pace these jerseys represented was definitely the right move.

The home version of the Reebok Edge era took the Flyers black jersey in a new direction. Rearranging the same colors as their previous away jersey, the Flyers kept their logo and font for the namplates and numbers. Opting for white shoulders and orange elbow pads, it was a low key change that set the home and away jerseys apart.

During their second Winter Classic appearance in 2012, the Flyers went with a brand new jersey design. Going for a new take on a “vintage” look, they changed the shade of orange and added a cream colored bar on the waist and sleeves. They returned to the Flyers rotation in 2014 when they were deemed the new alternate jerseys. The Flyers ditched them in the 2016-17 season for the 50th anniversary jerseys, and left them in the past for good when Adidas took over production in 2017.

When the NHL still played by the “home white” rule, this style of jersey was in the Flyers arsenal for 25 years. A modified version of the Flyers original home jerseys, the black stripe separating the orange shoulders and white torso was added in 1982, tweaked slightly in 1983, and worn until 2007. The Flyers finally changed their jersey design when Reebok Edge took over in 2007, and the jerseys that were a staple for a quarter-century were finally laid to rest.

The very first jersey the Flyers organization wore were a rusty shade of orange with no nameplates on the back. A black outline was added to the numbers in 1970, and nameplates were added in 1972. They were the Flyers away jerseys from 1967 to 1982 before they were slightly modified with a black strip on the waist and on the sleeves. The organization would later bring a similar style back as an alternate in 2010. 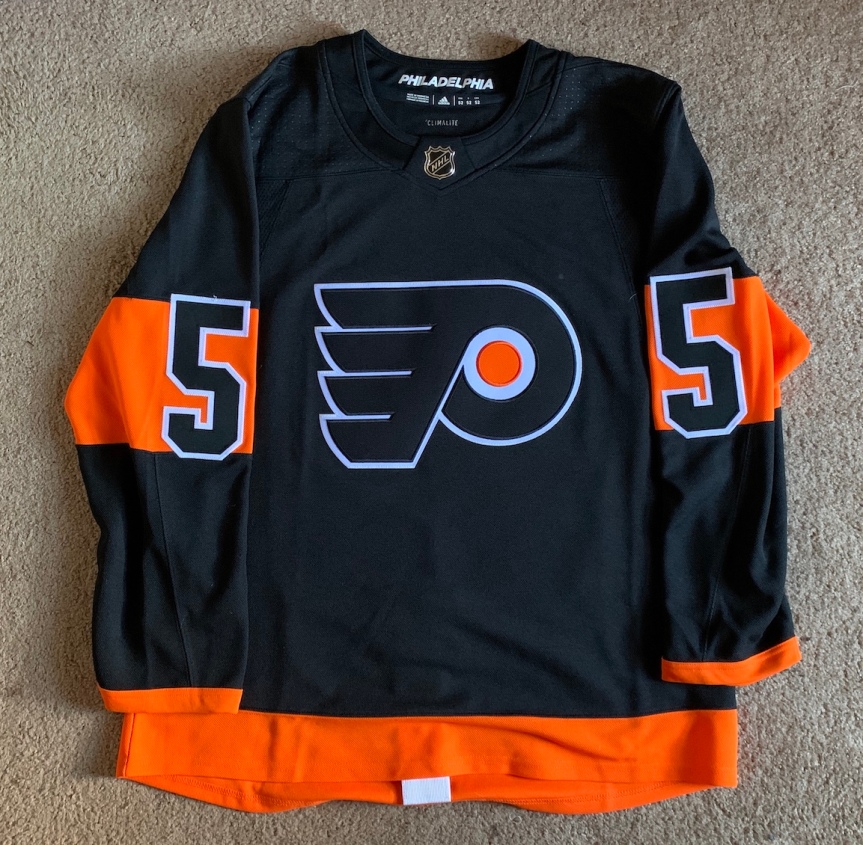 After sticking with orange and white jerseys for almost a decade, the Flyers brought back black jerseys into the rotation for the 2017 Stadium Series against Pittsburgh. They became the first alternate jersey under the Adidas brand starting in 2018. The nameplates are orange with black lettering and larger than the home jersey plates, and the jersey also features supersized numbers on the sleeves. Even though these weren’t exactly what most fans had in mind for a black jersey return, They have grown as a suitable change of pace from the standard home orange jerseys. 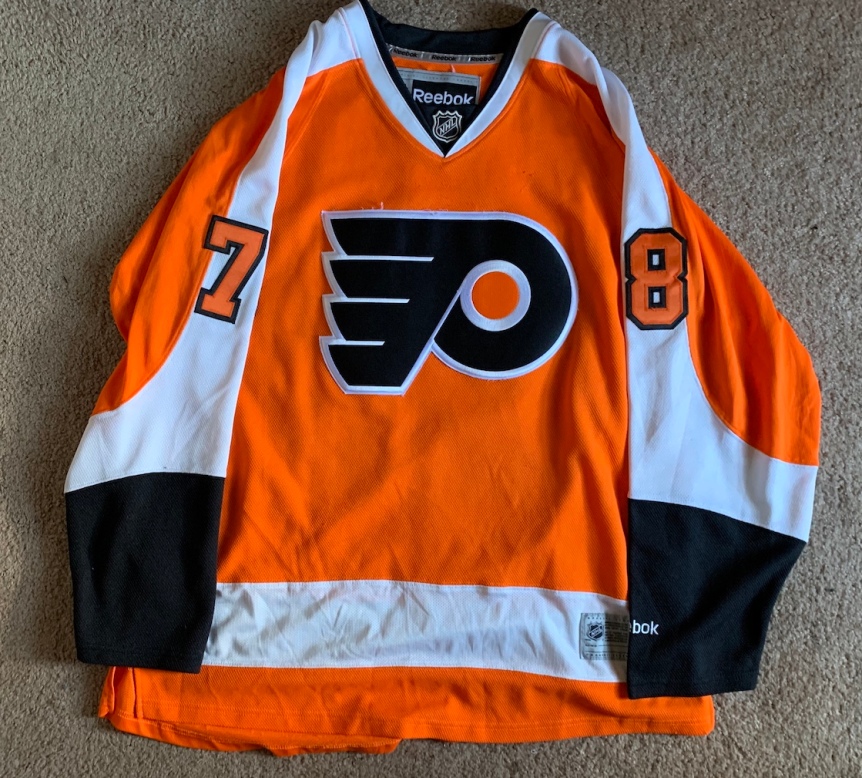 The current home jerseys are similar to the original Flyers jersey from the 1960’s, the only difference is the shade of orange. These jerseys originally debuted during the 2008-09 season as an alternate to the Reebok Edge black and white jerseys. They became their full time home jerseys during the 2009 playoffs, and later during the 2009-10 season. Simple. Sleek. Classic.

There is something special about these jerseys. Not only are they sleek to look at, they also remind fans of a glory era for the franchise. Even though they were just the same jerseys as their home and aways just recolored black, they were the first time the Flyers deviated from their orange and white color scheme. They debuted as an alternate in 1997, and became the permanent away jerseys in 2001 and remained in the rotation until Reebok took over in 2007.