Until recently, the Nashville Predators were on the cutting edge of hockey jerseys. Rocking a navy blue, white, and gold color scheme, the Predators are best known for their outlandish jerseys during the early days of their history. Lately, they have dulled their once offbeat sweaters, thanks in part to Adidas taking over. When Adidas took over production, there were a few teams who got sterilized by new designs, and the Predators were one of them. All the lines and stripes that were on the Reebok jerseys were removed and they were left with a solid white jersey with yellow ends on the sleeves and waist. Just a bland, boring, nothing happening hockey jersey.

The Predators were going for a focus on gold, and in that respect, they certainly nailed it. Just like the away jerseys, the frills were removed and they were left with a solid yellow jersey. Add these jerseys and their gold helmets and they might have the most ridiculous setup in the NHL currently.

The Predators debuted an all-gold home jersey for the first time in their history and they were…. fine. Going in a completely different direction than their previous dark blue home jerseys, it was a decent way to give the jerseys a facelift after a decade using the same scheme. 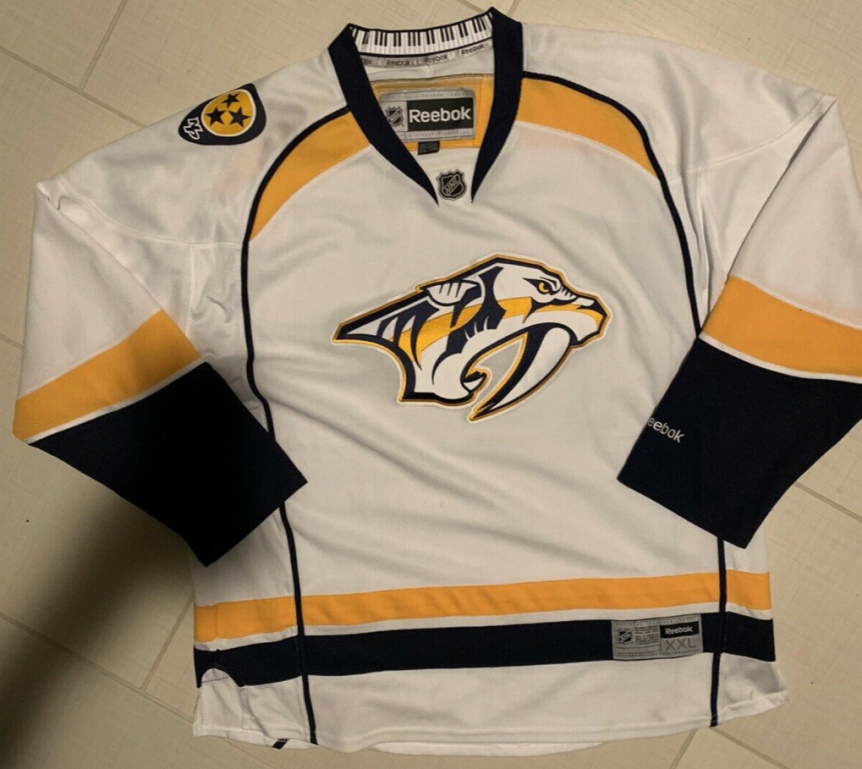 After eviscerating the Adidas jerseys, reviewing the Reebok Edge jerseys will be a cakewalk. When these debuted in 2011, the Predators were starting to change their focus to a gold color scheme, yet they didn’t drop the dark blue of their earlier Reebok style. With gold and blue bars on the sleeves and waist, as well as blue lines on the front and back leading to yellow underlays on the chest, they were a very pleasing look for an away jersey.

The Predators used their Stadium Series to pay homage to the Nashville Dixie Flyers from the EHL in the 1960’s. Those jerseys were yellow with a purple strip on the chest, but the Predators were the road team, so the opted to go with a white jersey with a yellow strip. They were a fine one-off on the ever-growing list of whacky Stadium Series uniforms.

The Predators took a Terminator-esq approach that removed the minor hints of yellow that were on the regular home-away jerseys. This marked the first time they altered the sabertooth crest by making it chrome with a red eye. Though they were only worn a handful of times from 2009 to 2011, they were a pleasing alternate jersey, and fit in just fine with the style of the home and away jerseys at the time.

When Reebok took over production in 2007, the Predators took the opportunity to make some subtle changes to their setup. Keeping the silver sleeves, but moving the blue to the torso, they also kept the inverted triangle behind the head, as well as adding “Nashville” on the front of the jerseys. It was just a few minor changes, but gave the jerseys a nice facelift but still kept the weird vibes of the previous design.

Much like the away jerseys, only a few minor alterations were made when Reebok took over. Most glaringly, the yellow bar on the waist was removed, as well as the yellow undertone on the sleeves, opting to go with more white. The changes kept the jerseys fresh without giving up the style the fans have come to know from the previous decade.

The Predators exploded onto the scene in 1998 with some off the cuff jerseys. Picking a dark blue, almost purple, yellow, and silver color scheme, the design gave them an oddly futuristic, yet totally retro, look. Taking the same approach to their home jerseys as they did the away, the color scheme and design stayed the same. These are one of the few jerseys in NHL history to have a different crest on the home and away jerseys. It was the only time the Predators majorly altered their crest in franchise history, and they went all out on a new jersey design to accompany the change. Known as the “Mustard Cat” the jerseys drew split opinions from the fanbase, and NHL fans in general. The brownish-yellow color and the almost robotic look of the sabertooth tiger defined the new look and went down in history as one of the strangest jerseys in NHL history.